Curator: Michael F Leruth
A critical event created by the artist at the White Box in New York to denounce the unfair powers that some museums exert with artists and presentation of critical and emblematic works of Fred Forest
www.fredforest.space

Taking an example from the Star Wars saga, the Territory of the Square Meter strikes back against the Empire of Art! After his exhibition this summer at the Pompidou Center, the artist Fred Forest mounts a counterattack using his own means of information and communication. There has never been anything like it before in the history of art, but one good deed deserves another! The artist is devoting an entire exhibition to the institution that organized a retrospective his work just a few months earlier. Forest is not just exhibiting the Pompidou Center in New York … but exposing it! In line with his practice of institutional and political critique, this counter-exhibition is a favor returned, a simple gesture of good will. Not wanting to be outdone by the unstinting kindness lavished on him by the Director of the National Museum of Modern Art and its curator during the preparation of his retrospective, Forest now wishes to thank them warmly for the eagerness with which they were dedicated to satisfying his every wish. Except, of course, for some minor omissions and shortcomings … like those mentioned on the partial list that appears elsewhere on this site. For instance, the discrimination to which the Center continues to subject him after so many years of companionship: discrimination compared to other contemporary artists, who are so polite and well trained that you would like to invite them home for dinner. Artists who have received much better treatment than he has … ever since a certain court case to which he recklessly subjected the institution for a lack of transparency. In hindsight, this was surely an act of temporary insanity, for which the vindictive children and grandchildren of this venerable establishment intend to make him pay for years to come!
Fortunately, the Force is strong with Territory of the Square Meter, which has already succeeded in upsetting the apple cart this past summer. Surely, the Force, which is the guarantor of all Justice, shall not fail him during the upheavals and tribulations to come.

Let us trust in Force. May the Force be with Territory ! 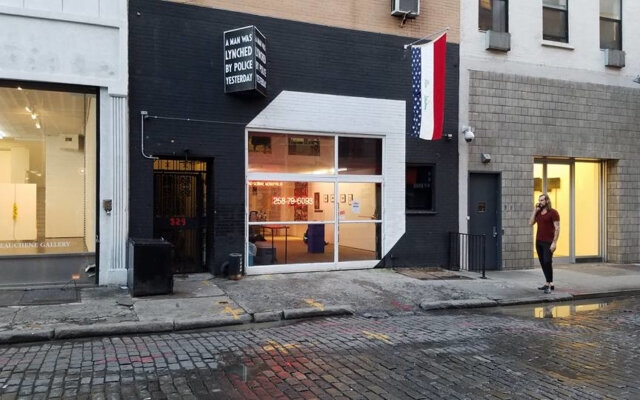 Hello, I am a French artist who once sued the Pompidou Center for its lack of transparency and I have now decided to honor the Center once again by making it the subject of an exhibition in New York City!

The counterattack of the Square Meter Territory.

We have never seen anything like this!  Just a few months after being invited to have a major retrospective of his work at the Pompidou Center in Paris, an artist is returning the favor by making the Pompidou Center the object of an exhibition in New York! I, Fred Forest, am that artist.

As both an artist and a concerned citizen, I am holding this exhibition in a spirit of objectivity and parody. Objectivity insofar as I am content to present the relevant documents with minimal commentary and leave it up to the public to interpret those documents as it sees fit and to arrive at its own conclusion. Parody as is evident the title I have chosen, in a nod to a cult series known to all: “The Territory of the Square Meter Strikes Back”.

As in Star Wars, there is a luminous and obscure FORCE, which artists, like the JEDI, know how to use in ways that defy logic to resist the henchmen of an abusive and usurping power. The force is a principle of metaphysical, ethical, and social equilibrium that exerts itself on the entire universe and against museums, art fairs, collectors and the market in particular. It is treacherous work that one would have to be crazy to do, and no Jedi is ever guaranteed success. No matter what the future holds, it is the fight that matters here and now! So let us fight!

Whoever you are, wherever you live, and however you get here (plane, subway, horseback, on foot, or online), do not miss this exhibition. Depending on your views, you will find it either messianic and consciousness-raising or ironic and amusing. This exhibition foretells of changes in the art world that will be either trivial or irreversible!

In this pivotal moment in history when humanity is confronted with drastic changes that are being felt the world over in every field of human endeavor, you have the choice between being a passive “viewer,” as you are in front of a Duchamp, or a committed “participant” and agent of change. This exhibition presents a dozen actions that demonstrate my lifelong commitment to unsparing institutional and political critique, giving the most attention to the most recent one: the Territory of the Square Meter’s epic struggle of resistance against the Centre Georges Pompidou or, to be more exact, those responsible for its turn to the DARK SIDE. May the Force be with us. 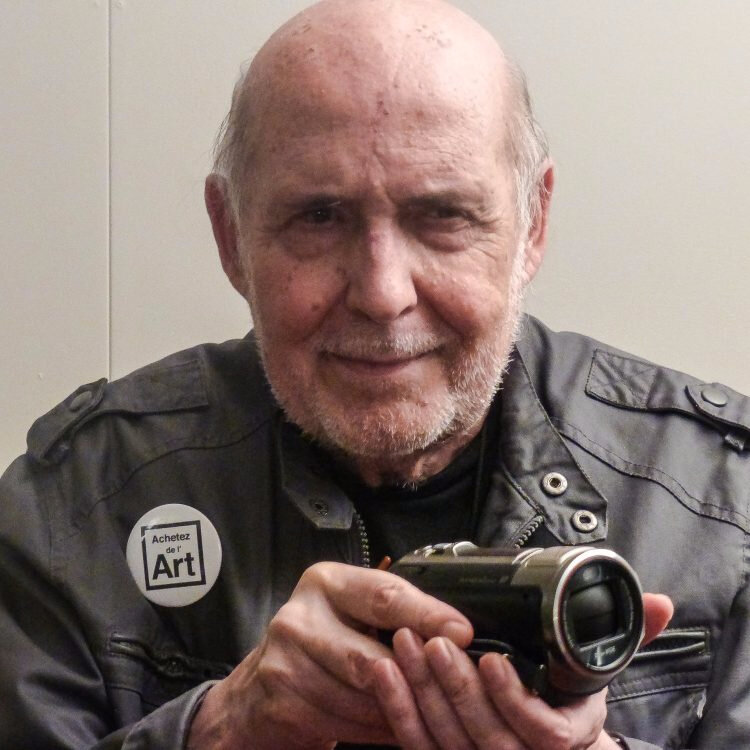 This action is to be seen in the historical context of 1973, when Brazil is led with an iron fist by a military junta. The artist’s act of provocation consists in wanting to use the media to create “spaces” of freedom in the press and free expression in the street. He soon faces brutal threats from the police state but ultimately succeeds thanks to the active complicity of Brazilian journalists on the spot, who help him circumvent the restrictions on free speech and public assembly. His status as both a guest artist and a foreigner gives him some leeway. Taking advantage of the circumstances, he pulls off a critical event of international dimension, relayed by newspapers around the world, calling into question the military regime of the period. Forest once again displays a unique and innate sense of how to create an event, perfect knowledge of how the news media function and malfunction, ethics, energy, and radicalness, as well as a tried and true practical creativity in response to circumstances. For him, the socio-political “happening” and “opposition” only make sense in terms of relaying information. While the artistic practice of sociological art has certain points in common with Dada or Situationism, it nonetheless acts on a different level via its direct confrontation with power and greater social impact via the channels of the mass media. In fact, its critical strength and capacity are out of all proportion to what one finds in the practice of artists such as Daniel Buren or Hans Haacke, whose “militancy” is tailor-made for the contemporary art establishment—simulacra for internal and therapeutic use by a small elite that desperately needs to soothe its troubled conscience … If they want to perform their duties to the fullest and win the respect of artists, institutions must first respect artists. They must learn that people are not inert matter to be shrunk, cut, and packaged as pleases the institution. I call on all artists to enforce this fundamental law from this day forward, and to stage a general strike if it is not respected—a total cessation of their production that would bring about severe economic, social, human, and esthetic consequences for all … including staffing cuts at the institutions themselves, unemployment, the cancellation of art fairs, and the collapse of the entire art market. … SOME WEBSITES OF THE ARTIST 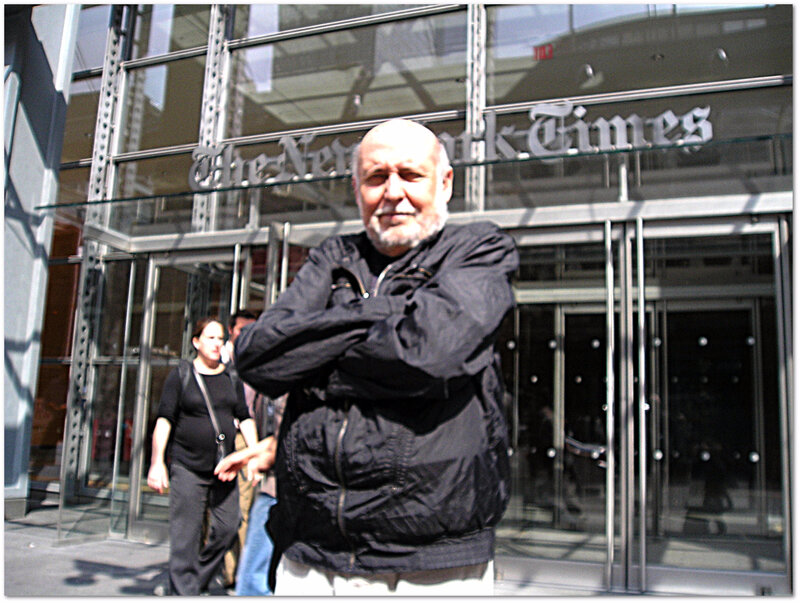 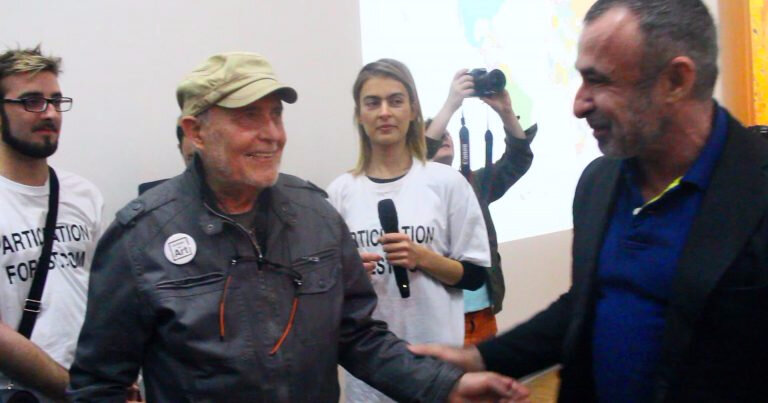